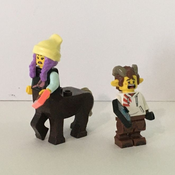 By NoahLego94
8 comments
"Can do, Will Do!", the famous catchphrase of one of Lego's most creative and noble heroes, Jack Stone! Launched in 2001, this character and theme had a unique charm to it, with a different minifigure type and an excellent color scheme. However, the main aspect of the overall series was the creative nature of the title character and his will to help those in need and inspire others to do the same; via any Rescue, Police or Fire-Fighting field.
The goal of this set is to celebrate 20 years of this character ( #YearofJackStone , #JackStone20th ), for older fans and to introduce him to a new generation. The story is that the red-suited bad guy/bank robber has broken into the bank and stolen the money (nothing too deep or complex here, folks!). In order to catch him, Jack uses a satellite from the bank's roof and turns a police-car into a Magnet-Mobile (inspired by a parrot that i latched onto a traffic-light poll).
The minifigures include Jack Stone, The Bank Robber, Police Chief Bud Brick, Female Police Officer, Banker, Octan Man and Redhaired-Girl, News-Reporter Louie Lines and Camera Girl, Parrot and possibly a Colelctor's Edition of a 4+ Jack Stone figure.