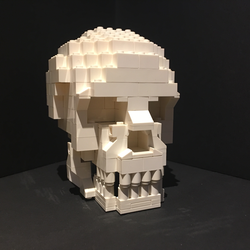 This is a father-son bond. The son broke his present that he receive for Christmas, but his father did more than a small effort to fix it,  creating this massive model of a robot, that he can actually fit inside! The robot is based off the toy that his son received as a present.

This would be a fun and interesting LEGO set, as it could be used as a toy, (like the story goes) or it could be used as a display. The Robot has many points of articulation, with around 4 in each leg(all able to move 360 degrees and move forward and back), and 5 points of articulation in the arm (excluding the fingers). The hands are able to hold minifigures, and other lego models that are about 1 stud wide (giving the builder creativity to customize the mech with their own lego bricks!). One of the main features is that you can replace the head of the Robot with a full minifugure with no modifications. This adds another play feature to the robot as now, the builder can create a mech suit as well, indtead of a full on robot. Removing the neck of the robot to fit a minifigure is surprisingly fun, moving some simply pieces without having to completely destroy the robot. The set comes with 2 (or 3) minifigures; A boy, a father and a toy which is a micro scale model of the main Robot (tecnically the Robot is a scaled up version of the toy)