In Russian folklore there are many stories of Baba Yaga, the fearsome witch with iron teeth.

She travels perched in a large mortar with her knees almost touching her chin, and pushes herself across the forest floor with a pestle. Whenever she appears on the scene, a wild wind begins to blow, the trees around creak and groan and leaves whirl through the air. Shrieking and wailing, a host of spirits accompany her on her way, as she passes she sweeps away all traces of herself with a broom made of silver birch. 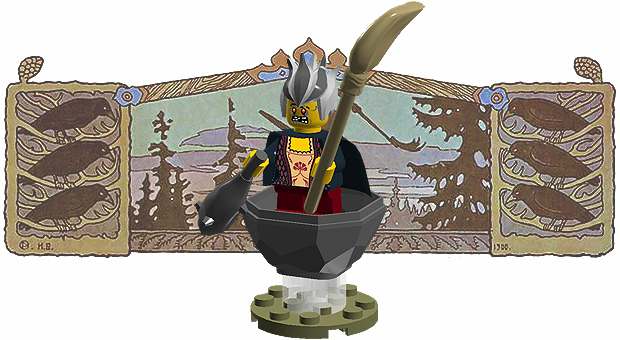 Baba Yaga lives in a hut deep in the forest. Her Hut has a personality of its own and can move about on its extra-large chicken legs. Usually the hut is either spinning around as it moves through the forest or stands at rest with its back to the visitor.

All the while it is spinning round, it emits blood-curdling screeches and will only come to a halt, amid much creaking and groaning, when a secret incantation is said. When it stops, it turns to face the visitor and lowers itself down on its chicken legs, throwing open the door with a loud crash.

The hut is surrounded by a fence made of bones, to keep out intruders. The fence is topped with skulls whose blazing eye sockets illuminate the darkness. 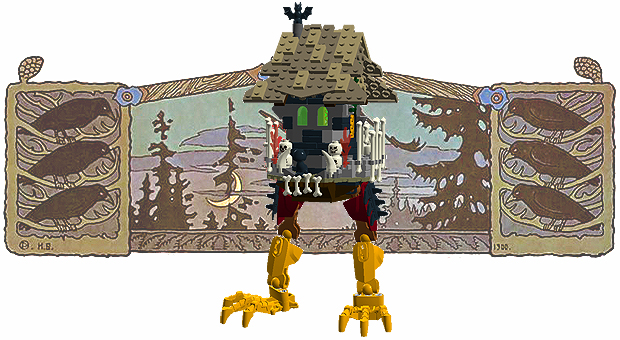 Although she is mostly portrayed as a terrifying old crone, Baba Yaga can also play the role of a helper and wise woman. The Earth Mother, like all forces of nature, though often wild and untamed, can also be kind.

In her guise as wise hag, she sometimes gives advice and magical gifts to heroes and the pure of heart. The hero or heroine of the story often enters the crone's domain searching for wisdom, knowledge and truth. She is all-knowing, all seeing and all-revealing to those who would dare to ask.

Baba Yaga's Hut is built with a variety of techniques, the legs are built with Hero Factory beams, making them posable. Above that, sits the base of the Hut, which holds the fence, and turntable, that allows the hut atop of it, to spin around to present it's door to it's owner, inside lies a small stove and fire. The hut is thatched with with hinge tilted plates, interlocking at the top, and allowing the hut's chimney to poke through.

.lxf file and pictures at Brickshelf