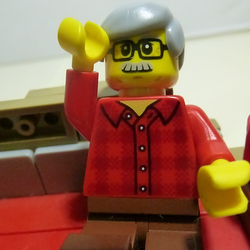 Among the many American 1950's tractors are the Case 311 and the distinctive Allis Chalmers G. The Case includes two accessories, a small hay baler and a tiller, and the Allis Chalmers includes a press pan. As far as functions go, the Case's PTO shaft rotates, and the baler dispenses pre-loaded hay bales with the turning of the Case's wheels. The tiller has rotating "blades," and the Allis Chalmers has front wheel suspension. Both tractors are minfig scale, and the MOC includes a farmer. Not only does the farmer possess two distinctive tractors, he also wields two other farming essentials, his trusty coffee mug and a wrench for repairing his farm equipment!