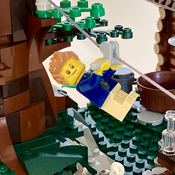 Wouldn’t you like to travel to Alpha Centauri in a couple of weeks instead of centuries, or go to Mars in a matter of hours? This spaceship could make that a reality. The IXS Enterprise exploits a loophole in general relativity to make superluminal travel theoretically possible, by expanding space behind the ship and contracting it in front of the ship, pushing it through space much faster than the speed of light.

The IXS enterprise is a concept proposed by NASA scientist Dr. Harold G. White for a faster-than-light spaceship. It makes use of an Alcubierre drive proposed by theoretical physicist Miguel Alcubierre, and utilizes “exotic matter”, which would provide the negative energy that would be required to expand the space behind the ship and contract the space in front of it. The two large rings reduce the energy requirement of the Alcubierre drive by thickening the wall of the warp bubble encircling the spaceship. (Hope I got that right).
My design is based on the conceptual CGI work of Dutch artist Mark Rademaker, and I estimate that it consists of approximately 2800 pieces, since I know that each ring is quite complicated and consists of 1080 pieces each.
I think it would make for an exciting building experience and a beautiful LEGO display piece, but it is also sturdy enough to be played with. Dr. White and Mark Rademaker created this concept in order to inspire young people to pursue careers in science, and I think making it into a LEGO set will help them in achieving that goal and inspire even more boys and girls to be interested in science and space exploration.
Hope that some of you will like it and consider supporting. Thanks for stopping by, and thank you for your support!