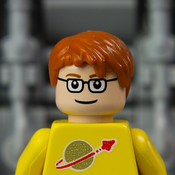 I've always been a fan of building animals out of Lego, there is something about trying to create something organic out of the solid, mostly angular pieces that has always appealed. I grew up watching a lot of David Attenborough documentaries and the large animals on the African plans always felt particularly exciting due to their scale and power.

The main part of the project is the adult elephant, I have been tinkering with her for over six months trying to perfect the look. Once I had finished the elephant I decided it needed some additions to add display value and playability. First was the tree; I wanted this to be taller than the elephant so it did not look too small and, unlike a lot of Lego trees, I wanted it to begin to reflect what real trees look like. To do this it has many branches which use clip and bar connections to allow interesting angles.

Next came the naturalist and the camera; the camera tripod was one of the hardest bits of the set to get right, the eureka moment came when I realised the main connection could be towards the ground rather than directly under the camera.

Finally I added the elephant calf which took a bit of perfecting to ensure it looked good at such a small size compared to the adult.

The relatively new mini ball and sockets pieces from the Mixels have really helped bring my elephants to life, being able to pose them with these rather than relying on connections that hinge in only one plane gives that extra bit of life to the models.

Lego have made a moulded elephant in the past but this is hard to get hold of and expensive. I have always felt brick built animals are preferable to moulded ones, especially for larger animals, it just feels more Lego to me.

I decided that I wanted to go minifig scale for maximum playability and use. Maybe one day there will be a herd of the design in a safari diorama or a customised versions with a regal maharajah riding on top in a plush tent or kitted out in full fantasy battle amour!

You may notice that the camera person has a familiar logo on her jacket and there is a very good reason for that. If you have come across me at all before you may know me as a builder of spaceships and sci-fi, either online or in books such as Lego Space: Building the Future or the DK Ideas series. Lego Space in some form or another will always be my first love but I struggled to come up with a space based project I thought would work well on Ideas. That is why the classic space logo just had to part of my first Ideas project somewhere.

Thank you for reading and I hope you like my project, if you do please vote!