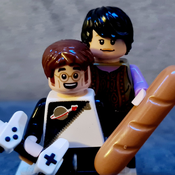 "L'Aiguille" (The Needle) is a place that really exists at Etretat in France. It is a peak of a cliff in the shape of a cone. Its strange shape has given rise to many legends over the centuries.
Some legends indicate that ships full of gold would have run aground at the foot of the needle or other legends tell that a treasure would be hidden in the heart of the needle because it would be hollow.
Many historical texts relate to this legend: the secret of the needle is quoted in a book dating from the year -56, a treatise of the X'th S speaks of the "master of the secret of the needle" and so on during the centuries, legends about the needle have been formed. The legend that the needle is hollow is so lingering in memories that scientists actually did surveys to find out if it was really hollow!
Many books, films or series also relate these legends.
This MOC takes up the landscape of Etretat and its "Aiguille" (needle). It also includes the places linked to this legend:
To increase the pleasure of this construction and extend this legend, the castle and several rooms have been fitted out inside, including a treasures' exhibition room (with rotating display cases revealing the other gems).
I would like to associate some minifigures with this MOC, I obviously have my idea, but the subject is debated. So, I would like to have the opinion of the LEGO Ideas community to know what types of minifigures and from what era would fit best into this construction? (Antiquity, Middle Ages, modern times, pirates, knights, squires?) Do not hesitate to offer me minifigures in the comments.
Adélaïde