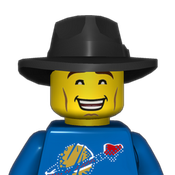 By Evilshadow
51 comments
Have you ever wondered how rescuing space capsules work?
To get my answer I searched Nasa's database and found their Recovery Ships, getting fascinated about them, specifically the Libert Star, which became the base for this model.
It consists of a ship, 2 removable decks, one with a small passage, an infirmary, the second deck holds the ship's controls, and the main rear platform with the crane, the capsule rails, and a small platform.
Additionally comes with the capsule itself, for two members, floating tanks, a rubber boat, two diver astronauts, three crew members, one doctor, two space cadets, and two space technicians.
I think it would make a good addition to the current Space Sets available and it would be really fun to build and give some ways about how capsules, shuttles, and other space gear lands at sea.