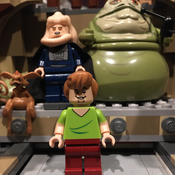 Little Mac fought his way through the Minor Circuit, but this fight will prove to be his most challenging yet as he goes head to head with the monstrous King Hippo. Will Mac prevail, or will King Hippo prove to be too strong for him?
This LEGO Ideas project was inspired by Punch Out, and features a boxing ring, Little Mac minifigure, and, of course, a buildable figure of King Hippo. Punch Out is one of my favorite game series, and King Hippo is among its most iconic opponents, so I thought it would be cool to see this iconic video game foe built in LEGO form. Not only does the set feature King Hippo's main appearance, but it also features variants of him with his classic NES appearance and his title defense outfit. Punch Out has games from multiple generations of consoles, being a beloved franchise by old and young gamers alike. Whether you play games on the NES, Wii, or even Nintendo Switch, Punch Out has a presence, whether it be the games themselves or Little Mac's appearance in the Super Smash Bros series. If you're not a fan of the series, this would also be a great set for fans of boxing.
Whether you enjoy playing video games or love boxing, a LEGO Punch Out set would look great in your collection. Both crowns used are pieces that were in official LEGO sets. The first crown is from King Pig from the LEGO Angry Birds sets, and the second was used as an egg in the Venomsaurus set.