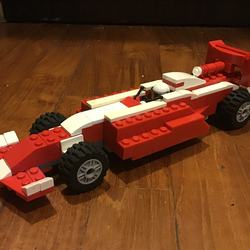 This is a Grand Prix race car based on a f1 car with off-road tyres. It is made up of the front wing, rear wing and the body of the car. It also has two antenna bricks which make up the halo guard normally seen on F1 cars nowadays. It also has a driver in the cockpit which is basically made up of a helmet component, a minifigure head and a cylindric brick. We built it as we wanted to see what a F1 car looks like if we swap road tyres for off-road tyres. We also wanted to see what a creator-sized F1 car looks like in a scale that is larger than that of lego speed champions f1 cars.We think it will make a good lego set as it can be displayed on the shelf and can be played around with as well.
Functions
- Rolling wheels
- Adjustable Halo guard
- Removeable front and rear wings for transport
Also, you can build it in different colours to make it look like the liveries of different f1 team's cars.
44
204
days left