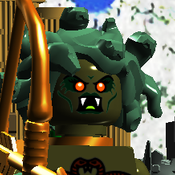 Medusa's garden of stone is a famous location in Greek myth. Best known from the adventures of Perseus, and his quest to claim Medusa's head to save his mother from a tyrannical king.

Medusa is probably the most well known of the three Gorgon sisters; Medusa, Stheno and Euryale. In some stories, Medusa was a beautiful priestess in Athena's temple. But when she was taken by Poseidon on the temple floor, Athena cursed her to grow hideous with snakes for hair, large tusks, a scaly complexion and a gaze that would turn any man who looked upon her into stone. In modern media, Medusa is often portrayed as an evil monster. But in the original myths she was a victim. She was hunted by kings and warlords from all over the world who wanted her power for themselves. As more and more cruel men tried to kill her, her garden of statues grew and grew.

I chose to make this as my first project on here as part of a series of Mythological sets. Mostly for display, but with a few play features here and there. I have, ever since a child wanted to get my hands on really big and beautiful mythology LEGO sets, but it's never been released - much to my despair. I have built plenty of mythological sets on my own and on LDD (Lego Digital Designer), but with the lack of proper bricks, it's never been that successful in physical form. So I thought, maybe - hopefully - people, like myself, will be interested in more visually immersive mythology sets. Not just minifigures.

The color scheme for this was inspired by real life ruins and nature. I didn't want to make Medusa green, since there's very few snakes that are actually green. I chose to make the plants growing in the garden three different tones of green. The rock and ruins are each two of colors. Light and dark grey, respectively light and dark sand. I also added a few treasure pieces to make it more play-friendly and a small interior with a hidden cave that is not visible on the images. I wanted to make the set as realistic as possible, and hope I somewhat achieved just that.

If this project is made real, IF it gets enough support, I also want to include a short LEGO comic featuring the story this set is based on. To both be enjoyable AND educative!

As I stated before: This is just the first in a series of mythological sets. Not all will be Greek mythology. I hope you enjoy and feel free to ask questions and please support this project.