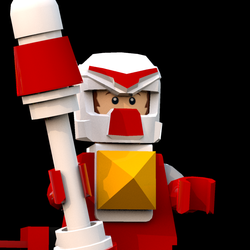 In the seat we see the cocky and bold Jan Kugo(Jesse Dart in the US) wielding his Astro-lance. Kugo is one of three cyborg companions protecting the Princess of the Moon, Aurora who must travel to the Great King planet and restore the Galaxy Energy in the year 2072.