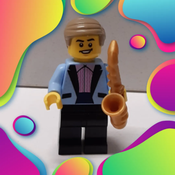 By Erik_lego_saxophon1
10 comments
Hi,
this is my first idea that I publish on Lego Ideas and I really hope that a lot of people will support me and my idea.
I play Brawl Stars very often and one day I thought "Why can't I build a character from the game out of lego?"
Above all, I chose my favorite character for my project: Surge.
I really like how the character looks in the game and that's when I had the idea to build this character out of lego.
With a lot of creativity and time I have completed my long-time project. Surge is posable with many different joints.
He has special functions, namely you can take of his glasses and move his fingers.
He has also the upgrade variants like in the game (his glasses are changeable)
It consists of approx. 600 lego parts and is very detailed in the game.
So guys feel free to show my idea to your friends and it would be a huge help if you support me in this project.
Erik