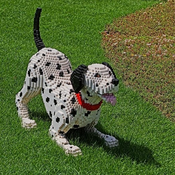 This is my first project on the site. It is a small scale version of the hollywood hotel: ie the twilight zone tower of terror ride which is found in Disney's California Adventure park in california, and also at the walt disney studios park in paris. Ideally this set would be like the architecture style sets that lego allready has with the inclusion of a bell hop minifigure. There should also be the beige colour on the snot bricks on the main tower but unfortunately I did not have many in that colour. Also printed bricks could be used to make the sign.

It is a medium/hard build and would ideally cost about $30, however judging by the prices of other architecture sets it would more likely be $40. The set contains over 300 pieces and the base measures 16x14 studs. It is also about 20 bricks high. I think this would be a really nice set and a good addition to the disney themed minifigures and new sets coming out. Ideally in the future I would like to have more sets like this based on other disney park rides. Do you have any suggestions, if so, please leave them in the comments. Thank you for taking the time to look at this project and please comment, share and support.