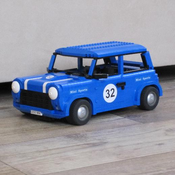 The new model was given the RS500 designation to highlight its strictly limited production run of 500 individually numbered vehicles, all of which were offered for customers to purchase. Each RS500 carries a metal plaque on the centre console, hand-engraved with a unique identification number from 001 to 500.

The changes include a significantly larger air-to-air intercooler to deliver a cooler, denser charge; a larger air filter box for increased airflow; larger diameter exhaust downpipe; and an uprated fuel pump, along with an updated software calibration to optimise the performance of the revised engine.

Engineered by Performance Car Enthusiasts The Focus RS500 engine has been modified by a team from Ford TeamRS in partnership with Revolve Technologies, the automotive engineering firm which develops Ford approved performance upgrades through its Mountune Performance brand.

All Focus RS500 vehicles will be painted in a standard Panther Black metallic colour, before being shipped to a dedicated 3M facility near Frankfurt, Germany, where a special film will be applied to the bodywork to create the matte black effect.

I love the Lego Model Team Style, first i have build this Car in LDD. Then I build the car in real.

I think the car Looks cool, Hope you like it.