The Battle for Arcadia - The Board Game 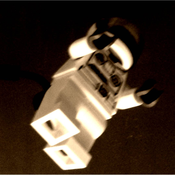 I decided to make a LEGO board game based on the famous battle from Doctor Who. This set was inspired by the events in "The Last Day" and "The Day of the Doctor". I decided to merge the drama of the SF TV show and the playability of LEGO Games.

THE CITY OF ARCADIA

The city is covered with buildings, a bridge walkway, details, a Citadel and fields for gaming figures. The Citadel contains a central part decorated with spires and a olive green dome and a battlement around. The battlement has 2 starting points for Gallifreyan soldiers, a sky scanner, a turret and decoration columns. There are also 3 other turrets in the city. There could be a message written on a wall: "NO MORE"!

SKY TRENCHES: I reduced their number to 6 for this game (original: 400). The sky trenches are represented by cones on a grey panel.

12 GALLIFREYAN SOLDIERS: The 4 soldiers in the turrents can't be move.

THE TARDIS: It's made from a blue box with a light on the top.

GALLIFREYAN BOWSHIPS: They look like a shuttle (my assumption).

THE MOMENT: The Doctor must decide if he will use this powerfull weapon to destroy both sides or not. It comes with fields for the Doctor and his TARDIS.

DALEK FIGHTER PODS: 4 fighter pods are attacking! Each has 3 wings.

4 DALEK SAUCERS: Each saucer has the tipical bronze color, hemispheres and it's placed on a transparent stick.

DALEK MOTHERSHIP: This large saucer has the similar design like the smaller saucers but it's larger and it carries the Dalek Emperor.

SEPARATOR TOOLS: a crowbar, a tube (for saucer hemispheres and other similar parts) and a regular brick separator

1 The Daleks start first because they are the invader.

2 Before you start placing and moving the microfigures and other gaming figures across the board, the invader must break trough 6 sky trenches.

3 The invader breaks trough the sky trenches by throwing the dice. If you get yellow circle (attack), you remove 1 sky trench (remove 1 cone).

4 The defender does the same, but his attack means damage on the invader figures.

5 For both sides, the red circle means 1 damage during the whole game.

7 After the sky trenches are destroyed, the players can start putting their figures on the board and move them around according to the marks on the dice.

8 Gallifreyan soldiers start from their posts at the citadel (the 1x4 tiles).

9 Soldiers at the turrets can't move around.

10 The Dalek attack forces, the Doctor, the TARDIS and the bowships start outside the board. They are  placed at the board according to the mark on the dice.

11 Before placed on the board, a figure can't attack an another.

12 The minifigures are moving across the fields according to the mark number on the dice.

14 You can move in all directions.

15 When you want to get on a higher position, you just jump on it if you get enough steps on the dice.

16 The yellow circle on the dice means attack.

17 There is a attack range: 10 studs/lenght of a brick seaparator.

18 Turrets can only spin.

20 The TARDIS doesn't attack like other. It attacks by crashing into enemy when it gets enough moves on the dice to get on the enemy's field. It can only attack Daleks. Even when they are several enemies on its path, it can destroy them all.

22 Every object has health.

23 The gaming figures with more health are crippled every time when they take damage to mark they current health state.

24 The yellow circle can be also used for regeneration or repair. You can regenerate 1 of your soldiers or repair 1 damage at your craft. Crafts which were totally destroyed can't be repaired.

If the Doctor comes with his TARDIS to the Moment, the final decision dice is thrown.

1. The Doctor uses the Moment and ends the war by destroying both sides. (transparent red)

2. The Doctor didn't use the Moment. Gallifrey is saved in a pocket dimension, Daleks lose. (dark red)

27 The enemy base cannot be attacked before all enemy forces are destroyed.

28 Although all other of his forces are destroyed, the player can still defend the base by attacking the enemy.

29 Without the final decision, the winner is the player who destroys the enemy base first.

THANKS FOR PAYING ATTENTION!

Some other of my projects:

- the background is taken from the Internet.

Doctor Who belongs to BBC.