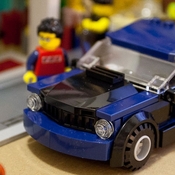 This is a little architecture project, which is my own studio in the brick city. Behold, this is not just another modular building exercise.

As an architect (not a LEGO architect but real architect, haha), I want to put what I learnt in school and work to the brick city. I went through the typical architectural process, from sketching to form study to actual building it, and it was fun!

The idea comes from the basic LEGO bricks. If we can use the bricks for form study in architectural model, what if it grows and becomes the building? Also, during brick building, we actually just do two basic operations: addition and subtraction. Through these operations, spaces and voids are formed and make openings and skylights. This is what this studio is presenting.

The new studio is not just a landmark in the city, but a milestone. It does not just create a building for functions and sit in the brick city, but it sets a new path and inject design culture into the town. Now let's take a look at the contemporary architecture style!