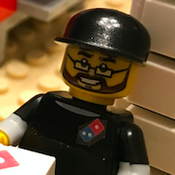 Founded in 1960, Domino’s is the recognized world leader in pizza delivery operating a network of company-owned and franchise-owned stores in the United States and over 80 international markets. Domino’s delivers more than 1 million pizzas a day worldwide, and customers can choose from more than 34 million different ways to create a single Domino’s pizza.

This model was inspired by a new location that opened in the downtown area of Montreal, Canada in 2017. In addition to the dining room and production area, I have built a manager’s office, walk-in cooler, kitchen, and storage area.

The model was designed with play-ability in mind, with some fun components to build. It has a floor plan just like a real restaurant, with plenty of room to move minifigures around.