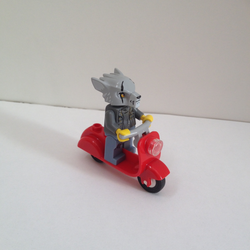 Hello! Thank you for taking the time to check out the Restaurant and Soda "Bar"!

There isn't much to look at for the exterior, but that's intentional. The sides are plain because they're meant to be against other buildings and not shown. The front is also mostly plain, and that's intentional, too, just to give a surprise when the roof is removed. While the outside is plain and boring, the inside is extremely lively, just to give a contrast, the way many restaurants in my area are configured. However, the sign on top reading "Matt's Cafe" with a minifigure statue of the original owner, Matt, on the roof, is supposed to detract from that plain storefront. Like many restaurants and stores in my area, the front is full of large windows, and the door is glass.

In contrast, the interior is lively and full of minifigures and color, even though the walls are white. In the back left corner, there is a stage with a small band playing. A drummer and guitarist accompany a singer, and many tables are close to the stage so patrons can see the band perform. At one such table, two ladies are enjoying a plate of cakes, while at another, a waitress has accidentally slipped on some spilled water and is horrified to have ruined her customer's dinner. The customer looks worried, too. At another nearby table, a waitress has set down a plate with a hot dog on it for an older man, while a younger woman, presumably his daughter, is watching the band perform. Near the stage, there are some culture items posted on the wall, and behind a wooden door is the kitchen. Inside, a waitress is walking in, while three chefs prepare food. A small sink is near the door, and a chef is cooking some food on a range (combined stove and oven). Two bowls sit near the refrigerator, which is chock-full of food waiting to be cooked. Next to the kitchen is the soda "bar," where patrons are served non-alcoholic exotic sodas all night long. Two awards that the restaurant has won sit below the soda dispensers, which are mismatched intentionally, since they are supposed to look as if they have been replaced so many times that they no longer match. Nearby, a janitor cleans up a mess that someone has made. Next to him is a small bathroom, to be used by either gender, with a toilet, sink, soap dispenser, and even a paper towel dispenser near the toilet. The restroom has a blue door to distinguish it from the janitor's closet, which has a white door. Inside the janitor's closet, all sorts of random cleaning supplies are scattered everywhere, and a copy of Spooky Tales sits on a small stool. That's how the janitor spends his time if there are no messes to clean up. Near that, a greeter stands at a front desk with a cash register. Nearby the greeter, a family of five waits for their meal to come at a larger table. Close to them, a set of twins, a boy and a girl, appear to be having a birthday party, judging by the cake with a huge candle on top. Near those families, a college student works on his laptop, desparate to get his assignment done, a mug of coffee by his side.

That's pretty much it for the actual restaurant, but there are still two things left. The first is a red sports car that appears to be a pretty high-performance car, which is being driven by a man holding a pretzel. There's also a person dressed in blue wearing a white helmet and holding onto his skateboard.

I didn't count how many pieces or minifigures I used, but I'll assume that I used about 2,700 pieces and about 40 minifigures.

Because it's so hard to describe this project in words, I'll leave it up to the images to show all of you what this project has to offer. Once again, thank you for taking the time to check out the Restaurant and Soda "Bar"!