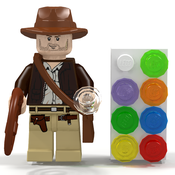 A race of aliens arrive on Earth in a fleet of 50 huge, saucer-shaped motherships, which hover over major cities across the world. They reveal themselves on the roof of the United Nations building in New York City, appearing human but requiring special glasses to protect their eyes and having a distinctive resonance to their voices. Referred to as the Visitors, they reach out in friendship, ostensibly seeking the help of humans to obtain chemicals and minerals needed to aid their ailing world, which is revealed to be a planet orbiting the star Sirius. In return, the Visitors promise to share their advanced technology with humanity. The governments of Earth accept the arrangement, and the Visitors, commanded by their leader John and his deputy Diana, begin to gain considerable influence with human authorities.

Here you find a small ship to surface shuttlecraft from the TV Miniseries.

And Soldier (Shown with gun and with flag)