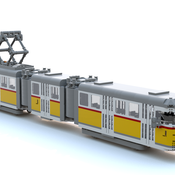 This tram belongs to a subtype (FVV CSM-4) of the series produced in the largest number in Hungary – FVV CSM. Trams – by the nickname „Bengali” – were produced between 1961 and 1975. Production began in a main workshop named after Árpád Füzesi in Budapest, but from 1969 trams were produced in Debrecen. Altogether 181 pieces of articulated trams were produced. Nowadays this type of tram isn’t being run in any city by schedule, only as nostalgia tram. Last vehicles were withdrawn from traffic in 2014. Aside from some vehicle, all produced trams were wasted. It was a determinant series of tram at its era. For us, who had travelled by them, the final disappearence of the series is a sad feeling with lack.

I have been at several LEGO exhibitions. I am expressly interested in LEGO vehicle models with mostly hungarian connections. However, I have never met the LEGO model of this tram. Because of this – and because I like this type very much – I have decided to build it on my own, or at least to design the model of this vehicle.

This model doesn’t have the 6 studs of width preffered by the LEGO company, because my goal was not expressly to build child’s play. My model has 8 studs of width, which is willingly used by LEGO modellers. This width gives opportunity for even more realistic vehicle models to be made. During the designing of the model, the creation of the articulation was a special challenge. The interoperability of the articulation came up as a need, as well as the articulations to set into bisectors during the trajectory rotation of vehicle parts, like the articulations of real vehicles. I granted this ability with special mechanics above the parts of articulation. Obviously this was designed in a completely different way at real trams, but that solution couldn’t have been made in this size. Besides that, I tried to model the reality.

Further development of the model:

This model doesn’t contain motorized propulsion yet. It was expressly built with the purpose of introducing a determinative tpye of hungarian tram production. It was meant for exhibitions, in order to enrich this thriving repertoire with a new hungarian model. Of course this model can be played with, because it was made to be able to take the arc of LEGO rails. Otherwise the remote controlled model type with motorized propulsion has already been made. The battery and the receiver unit were placed in the middle part of the vehicle. Both of outside cars were provided with motors, which motors propel all four axes through gearing. The gearing was selected in a way to be the speed of the model proportional to that of the real vehicle.

Thank you for your interest. Please do not forget to support my project!