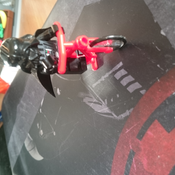 Jayce and The Wheeled Warriors :

When I was a child, I loved this animated series, and I played to rebuild the vehicles whith my Lego.

Today, I want to revive this series and remember everyone the child's soul of the « Jean Chalopin »'s generation and make discover to those who don't know.

During experiences intending to find new plants to overcome the famine in the univers, the biologist Audric created by mistake the Monstroplantes, half vegetable half animal malefic species, endowed with intelligence and lived by Black Light.

The latter, helped by is friends, The Conquerors of the Light (Flora, Oon the rider, Gilian the magician and Herc the navigator), travels in search of his father who ran away, while combating the Monstroplantes and their leader, Diskor.

It's about Forcair, the hero's vehicle (Jayce) who's equiped with a powerful pliers on the top, to hang the Monstroplantes and eject them. It's equiped with one missiles launcher, two laser beams, et one water beam on each side. Also fast and agile, it will bring out our hero from many difficulties.

In addition to this one I present to you today, there are four more vehicles : Vrillair, Trigulair, Blindair and Depistair. Plus a mobile base and an atypical space ship.

I realized it with the Lego Digital Designer, because I do not possess the parts needed in the right color. Made with 190 bricks, the vehicle is accompanied of Jayce and the rider Oon.

I hope to get you back to the childhood and convinced you to support my project.

Thank you for reading me, have a good day.