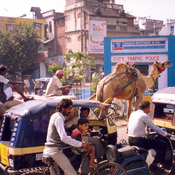 The title is Black Falcon's White Castle, but it is actually a very light bluish gray castle. It is a small but strong castle, a light gray castle, a home for knights and soldiers, and a defensive fortress surrounded by a moat. It is a fortress surrounded by a moat, and consists of four castle towers, a wall, a main entrance, and a fortress (villa).
The main entrance consists of a lowering bridge that crosses the moat and an inner door. There is a low tower above the main entrance. When you go inside, there is a resting place for soldiers, a place to store various things, and a three-story villa where the castellan rests.
Behind the castle, natural rocks were used as barriers. In general, the two floors are all connected, so it is easy to defend. The third floor of the tower can be reached by ladder. On the first floor there is a well, a kitchen, a warehouse, and an arsenal. Overall, it is a defensive unit centered on archers, but it also possesses powerful cavalry. Walls and buildings are separated.
Lego that fulfills the dreams of men, the dream of a castle, allows you to have your own castle. I wanted to recreate the Lego castle I saw as a child.^^