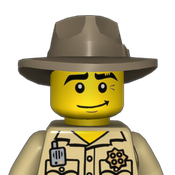 Who as a child has not dreamt of a machine making rainbow bubbles? My children love it and it would make for a fantastic eye catcher for LEGO vendors. It works fantastically, even though I had to struggle with many limitations concerning the choice of LEGO parts I had at hand.

My kids love it, I love it and I hope you like it too!

The Idea was born starting with a water pump that I built for my 4-year-old son who – surprise – is fascinated by water. I found some proof of concept LEGO water pumps, so I started to devise one myself based on the idea of the centrifugal pump. With a working water pump, I thought that this pump would also work for air, which it did. Thus the idea was born.

Since I don't like the bubble machines using a rotating arm but rather prefer levers, I decided to have an arm moving up and down.

Later I improved the arm by fastening it at two points to have it move parallelly to the attachment. Have a look at the images and the video to fully understand what I can't sensibly describe in an intelligible way.

I did not like to push two buttons to start the machine, so I experimented until I managed to have both motors driven by one box. The downside to that was that I had little freedom to place the motors, as I don't own any cable connections but had to make do with connection plates instead.

The machine does work surprisingly well, even though there are still some problems to overcome. One of the biggest problems is the container for the liquid. There are little LEGO parts that can be used, as far as I know, one of which I (my son) luckily own(s). For a commercial version I would rather use a bigger tank above the container that has a pipe ending below the surface of the liquid. Like that the liquid could refill the tank automatically. There is a LEGO tank for pneumatics that could do the job. I just don't have it, nor do I know anybody who does.

Another problem was the positioning of the motors for lack of cables. A lot of fumbling did the job, making the design unnecessarily complex though.

Then you must have some part with a hole to actually produce the bubbles. Sounds pretty easy, as you can certainly make almost anything from LEGO ... however in this case, that does not work for some – probably terribly complex physical – reason. The bubbles don't detach properly and tend to explode if you use a hole that consists of multiple parts. So you have to find a single part that is close to round and that has a diameter fitting your need as well as possible. Luckily such a part exists, so, yes, it does make a lot of bubbles! However, the direction and power of the air flow is crucial too, so the machine probably wants some way to regulate the flow, depending on the power left in the batteries. At least I had some problems at the start when I used a fresh set of batteries.

Watch a video of the machine in action.