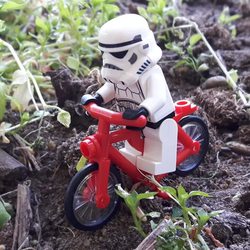 Here is another medieval micro scene that I have been working on.  It is The Golden Hall of Edoras from The Lord of the Rings!  In this model I tried to put in as much detail as I could with the pieces that I had. This model includes The Golden Hall of Edoras, the grey rocky platform, the hill that it sits on, and a path.  There is also a nice black border that surrounds the model.

Thanks for checking out my model and please support it!  Go and check out the other models that I have posted too.