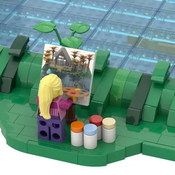 Please support GLEE, one of the best TV shows of all time!
Since it aired in 2009 Glee showed kids, teenagers and adults how to be yourself, no matter who you are.
It teaches how important tolerance, diversity, inclusion and friendships are.
And this all happens, while you enjoy a lot of amazing music performances!
It's time to try defying gravity, by supporting GLEE!
With 10.000 supporters, it gets a chance to become an official Lego set and you can reenact your favorite moments and songs! Or display it and look at it all the time! :)
GLEE would be a great addition to any Lego TV show collection.
Moreover, GLEE would be the first Lego set featuring a high school TV show and thus opening up a whole new fan base to Lego. :)
About my build GLEE:
Special details in GLEE:
The minifigures in GLEE:
Every 1k supporters I'm going to reveal a new character with accessoires in the updates section. :)
In case this becomes an official Lego set, Lego will decide, which ones to include. So don't lose hope, if your favorite one isn't in here (yet). :)
About Glee - the TV Show:
So don't rain on my parade and help GLEE hit 10k, by pressing the support button!
Don't stop believing, that GLEE will become an official Lego set, neither will I. :)
Thanks for reading all of this! :)
Hope you like it!
EvLeFri