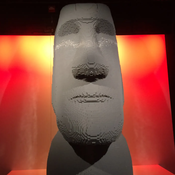 By UniversalLuc
9 comments
This is the Stanley Cup created in 1893 by Sir Fredrick Arthur Stanley or know as Lord Stanley. This trophy is awarded to the best hockey franchise in the NHL by winning four out of seven games in the Stanley Cup Final. This is the Greatest Trophy in All of Sports. This is truly the best trophy to work hard for and to be awarded since the team made it this far to play for The Stanley Cup. The recent winners of The Stanley Cup were The Colorado Avalanche and The Tampa Bay Lightning. This trophy is a great trophy among the five major sports. The bands on the bottom of the trophy is where the National Hockey League engraves all of the official players of the team that won the cup for that year. Also, the bands are removed every thirteen years in order to add another band for new teams that bring home Lord Stanley. The Stanley Cup weighs 34.5 pounds or 15.5 kilograms and has a height of 35.25 inches or 89.54 centimeters. Even though Lord Stanley is not very heavy or tall, every single hockey player and fan wants their team to compete and the ultimate goal to win The Stanley Cup.
Lord Stanley is the toughest trophy to win and therefore The Greatest Trophy In All Of Sports