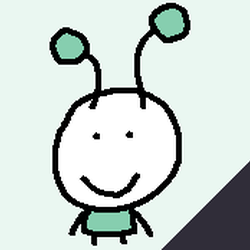 You've just crashed onto a mysterious, small planet, and you're greeted by.. friendly aliens?

This set is a small set based on the idea of friendly aliens who help lost space pilots. The planet is covered in tons of dull, green plants, and the aliens seem to have captured a satellite...
There's also the spaceship that the astronauts used. Its bright red colour helps it stand out from the rest of the build.

I built this because I thought a LEGO set that includes little, friendly aliens would be nice. I also wanted a set that was mysterious in a cute way.

I think this would make a great LEGO set because it features a lot of cartoony space elements. The classic spaceship, a silver UFO, and antennaed aliens.

The set has a nice number of 190 pieces in total and is built on one 16x16 plate piece. The program I used to render this turned all light green parts into grey for some reason.
29
days left
6