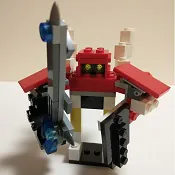 Great things often come in pair. While you helped this idea reach a new milestone, Bombardier announced a game-changing upgrade to its flagship:
the Global 8000 will soon be certified to fly at Mach 0.94, thus becoming the fastest commercial aircraft since Concorde.
In fact, the Global 7500 fifth Flight Test Vehicle (FTV5) actually broke the sound barrier during flight testing!
This is a great occasion to showcase the project with a new Bombardier livery shown during the press release. In the view below I extended the wing leading edge by moving down the curved slope pieces by one stud, simulating the leading edge flaps that are so critical for low speed handling. Finally I created this livery based on a fan request since most aircraft are delivered with a unique paint scheme chosen by its owner. That's right folks, we have reached 2,500 votes and we are well on our way to 3,000. To celebrate this milestone I present you the Bombardier classic livery for the Global 7500. This paint scheme was used on S/N 70004, also known as “The Architect”. It was the fourth Flight Test Vehicle (FTV4) of the program and was used for interior validation testing. The aircraft was donated by Bombardier to Centennial College in Toronto, allowing aerospace students to hone their skills by working on a state-of-the-art aircraft. Thank you everyone for your support and please keep sharing this project. And congratulations to Bombardier for recently delivering its 100th Global 7500! Because of your amazing support, the project is close to hitting 2000 votes!
Special thanks to all the Bombardier employees who keep supporting the idea. The success of the Global and Challenger jets is proof of your hard work and determination. Hopefully we can all get a Global 7500 Lego version to build at home.
To celebrate another milestone, I present you the NetJets livery! Netjets launched its fractional ownership business in 1986. It was an early adopter of the Global 7500 and influenced its design by ordering many aircraft for the purpose of operating from short runways like London City. I will keep adding different liveries as the voting continues so please tell your friends and family.
Cheers.
On Feb 13, 2022

Thank you for helping me score on this Superbowl Sunday.
Just like any aircraft has to get off the drawing board at some point, I proceeded to build the first test vehicule from real bricks! In the process I optimized the aft fuselage internal structure to eliminate downbending caused by the weight of the engines and tail. The wing connection to the fuselage is quite sturdy and has a visually pleasant upward curve. The whole model feels solid and can be held from anywhere on the fuselage for swooshing it around. The top fuselage is easily removed to reveal the interior (for which I will propose alternative builds during the next updates). When resting on its landing gear, the model is slightly tail heavy and requires the use of a small transparent stand just behind the main wheels. By shortening the stand a little, it can be displayed in a nose-up landing attitude. I am planning to add interchangeable parts to show the thrust reversers in action and the wing spoilers deployed.
Let's get to 2000 for the next update! Your support is greatly appreciated.
On Dec 22, 2021

Many thanks to everyone who supported the project so far, almost 500 already.
Because you've been good, Santa sent us a postcard of his latest sled model!
With extra range and the ability to land almost anywhere, he can deliver gifts all around the world and be back in time to celebrate with his family.
Happy holidays!