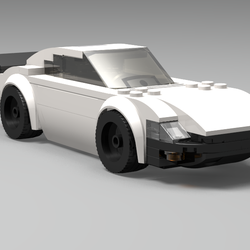 This was the first car to be named named "Skyline GT-R" and was produced between 1969 and 1972 under the model code KPGC10, and enjoyed legendary success in local Japanese touring car racing.

Thanks to this heritage its no surprise it became a collectors car. It is one of my favourite japanese classics, the boxy styling and an inline six with rear wheel drive can never go out of fashion.

I hope it can became a part of Speed Champions, because this old warrior truly deserves a place there.