LEGO Adventurers: The Temple of the Golden Banana! 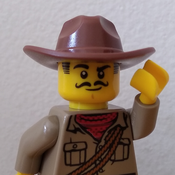 By ProfessorEyePie
65 comments
Hello there!
This is my LEGO Ideas project: LEGO Adventurers: The Temple of the Golden Banana!
Johnny Thunder and his team are off exploring again and, this time, they are in the jungle! They discovered an ancient temple; dedicated to the legendary Golden Banana! But they must beware, for Ranger Von Ranger is following them, intent on stealing their prize!
This temple is both a play and display set and includes minifigures, accessories and a vehicle! The temple is packed with action features and hidden secrets. It is also customisable, as it has a modular system found throughout. The five minifigures included are:
LEGO Adventurers is a classic theme to many LEGO fans and I wanted to make something that captures the essence of the original theme but with a fresh, new take.
I believe that this would make a great LEGO set as it is designed for both play and display. It has plenty of action-features to keep you busy and it looks great on display, with its cool, rocky details. The interior is packed with many features for the adventurers to discover and the flatbed truck creates more play possibilities!
Please support!
If you would like a quick overview, have a look at this video:
If you would like a more in-depth look, try watching this video: