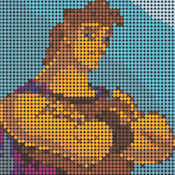 The Sandlot is a classic sports movie from 1993. This is still one of my favorite movies to watch and is my favorite sports movie. In this creation, there is the sandlot, a minifigure of Benny "The Jet" Rodriguez, and an oversized depiction of the Beast (otherwise known as Hercules). This set would be cool to display or play with and is for any age.
I am going to be making some Brickheadz sets next. Comment down below on what I should make and I will try to make some popular suggestions!
Make sure to look at my profile for more of my creations and follow me for future projects. Thank you for helping my in the struggle towards reaching 10,000 supporters!!!
The Sandlot:
The sandlot is the main setting for most of the movie. In this version it is miniaturized for the purpose of display. It has...
Benny "The Jet" Rodriguez:
The Jet is one of the two main characters from the Sandlot. It has...
The Beast:
The Beast was actually a mastiff, but throughout the beginning of the movie was portrayed as a huge "beast". This Beast is supposed to be of the perception of what it was at the beginning of the movie. It has:
Play features:
This sets has many play features for kids and adults to play with. It has...