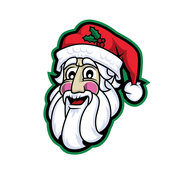 He's known by many names... Saint Nicholas, Father Christmas, Kris Kringle.., but there's only one Santa Claus! Now you can lend your support to own your very own Santa Claus made of 100% LEGO bricks!

'Twas the night before Christmas... and I had an idea. A LEGO idea! In 2014, LEGO released a Reindeer (40092) and a Snowman (40093). I absolutely loved these two sets, and I was very impressed with the use of curved slopes and SNOT technics used to produce an organic quality to the figures. In recent years, LEGO has added more and more curved slope bricks and various modified bricks that allow for characters like this (another example would the LEGO Mixels line). When building these sets I thought to myself, "What if I built a Santa Claus with organic and realistic features using only LEGO bricks?" And that's where the idea took off!

At the outset, I wasn't sure if it was possible. Creating rounded features with LEGO bricks is often like trying to fit a square peg in a round hole, but I decided to do some sketching with LEGO bricks in mind (one of the drawings is featured in the photo above... I made it into a vector image so it would be presentable, haha). The other aha moment was Kraang... yes, that's right, the TMNT villain. Inside the figure is a solid pink minifig head, and in the words of Clement C. Moore, "His cheeks were like roses!" And I knew I had my start!

The next big discovery was realizing I could find whatever bricks I needed online! Growing up, I had my own sets, but I was limited to building with the same bricks over and over again and most of the time the colors weren't correct. Finding out I had resources online made it a possible, albeit costly, venture, haha, but it was more than worth it! Around that same time I found out about this website, and I thought, "Well, now I have the ultimate purpose to create this... so I can share it!"

Not only is this Santa Claus figure 100% LEGO bricks, he's actual 100% existing and current LEGO bricks. I didn't have to paint, color, or add stickers to any of the parts, so it shouldn't be too difficult to produce. I didn't think to count ahead, but I would estimate there are close to or just over 1,000 bricks. He's over a foot tall and weighs a few pounds. His arms, elbows, wrists and thumbs are posable, as well as his hat. Although his legs are not posable, he can stand on his own and support his own weight. I wanted his legs to have the same organic and realistic feel, so I used traditional bricks and didn't add Bionicle parts (There's nothing wrong with Bionicle of course, just not the look I was going for).

This build would be too difficult for a child, but easy enough for a teenager... and adults of course, haha. This Santa Claus would make a wonderful holiday decoration much like a nutcracker or the LEGO holiday sets I have set up every year, or for just plain fun! I appreciate your support, and I hope you like it!