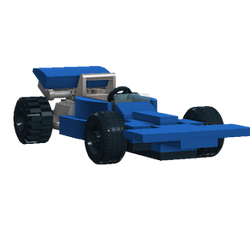 McLaren in 2016 was the second year after adopting the Honda engine, but it was sluggish at 6th in the constructors ranking.

Jenson Button of 2009 world champion retired in 2016. At the same time, the car name of Marlboro Project 4 which continued from 1981 is also over.

I wanted to make F1 car of the last year of Jenson as a package of speed champions.

I hope you enjoy this project and please support it!

My other F1 projects