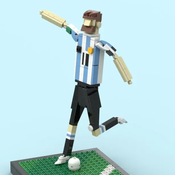 By DavisF44
16 comments
“Miracle On Bricks” - 1980 Winter Olympics Hockey
One of the most iconic moments in sports history and a true underdog story was the U.S. Hockey team's triumph over Russia at the 1980 Olympics. The game took place at what is now known as “Herb Brooks Arena” located in Lake Placid, New York. The heavily favored and four time gold medals winning Soviets were defeated by a U.S. squad made up of young college players during the medal round. Two days later, the Americans went on to win the gold medal in a victory against Finland. This LEGO brick model is inspired by the famous photo of U.S. goaltender, Jim Craig, leaping into the air and raising his stick as the final seconds ticked off in the game against Russia. The moment can be recalled by game commentator, Al Michaels, famously proclaiming, “Do you believe in miracles? Yes!”. A special moment from a game that has been dubbed, “Miracle On Ice”, has now been created in LEGO form as “Miracle on Bricks”.
Here are some features found in the model:
This model would make a great LEGO set because sports fans love collectibles and this build would be a great addition to put on display! The sports figurine market already has a large support group and this model is of similar scale to popular figurines, so it would fit right into any collection. This set appeals to the common sports fan as well as anyone who enjoys LEGO and saw the movie inspired by the game.
As a sports fan my whole life, the Miracle On Ice game has always inspired me in so many ways, so building a model like this was a must. Hopefully, this build can lead others to learn more about the history and story behind this iconic game!
The model includes 863 pieces.