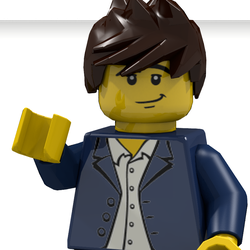 Help raptor trainer Owen Grady escape the four velociraptors Blue, Charlie, Delta, and Echo on his motorcycle as he races through the jungles of Isla Nubar! Will he escape or will the four hungry raptors eat him?

I know LEGO has already began a Jurassic World line, but I feel that they are really geared towards young kids, not us teenagers and AFOLs, so I decided to make my own Jurassic World set. One thing I have never liked about LEGO's dinosaurs is that they are always made from a couple of large pieces: two arms, two legs, a body, a head and a tail. There is nothing very LEGO about them, so that's why I've made the four raptors seen in the trailers and the poster completely from small bricks. They are fully articulable, with moving legs, arms, tails, and heads. I've also included the trees and bushes to give you something to display the raptors with, despite the raptors being the main attraction. It would also ideally come with Owen Grady and his motorcycle and possibly a weapon, like a gun or a knife, depending on what he'll use in the movie, if he uses one at all.

This project contains 390 parts, which would put this in a very affordable price range. Probably $35-$40 US.

If you would like to see this project as an official set, please support it! Also, sharing this project on LEGO fan or Jurassic Park/World fan forums and on any social media websites is vital, so please consider doing that!

p.s. Since this project was made before the release of the Jurassic World film, please excuse any plot or description errors!