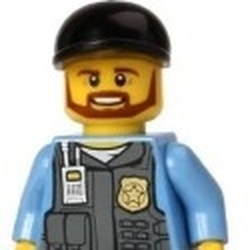 leenatelborg
25
176
days left
This is a modular corner lot police station.  It is based on my real life experiences working as a police officer with ideas from real police stations.
The first floor has a lobby with an officer waiting to great you at the front door.  Guests can also wait on the bench outside the front door.  There is complete viewing of the jail and booking process from the lobby.  The jail is also on the first floor.  The inmates are booked just like in a real station.  Their valuables are collected and their mug shot is taken along with fingerprints. They can then be placed in either of the holding cells.  The large holding cell can also be used as a line up room.  There is access to the jail from the outside so officers can place arrested Lego men right in a cell without having to walk them through the lobby.  They can park their squad cars (not included) right outside the jail.
The second floor is the detective's offices and evidence storage locker.  There are currently lots of neat items in the evidence room and the evidence management officer is working hard to sort the items.  Detectives are at their desks working hard on filing charges against suspects.
The third floor is the Chief's office and dispatch center.  Officers like to visit the dispatch center and grab a cup of coffee while they are there.  There is access to the roof from the third floor as well.  The Chief makes all his approvals from his office.
On the roof is all the tech and antennas needed to help dispatch officers throughout Lego land.
The set opens on hinges to make it easy to play with each level and each level can also easily be detached from the level below it.
I think this set has great play-ability for kids.  It has enough details to make it a great set and comes with plenty of cops and bad guys. Since their are plenty of Lego police vehicles out there, I did not include one but there are lots of DONUTS!
25
176
days left