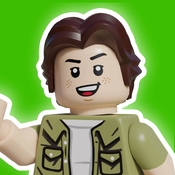 Willy Wonka and the Chocolate Factory
Willy Wonka and the Chocolate Factory is one of the most classic films of all time as well as one of my personal favourite musicals to date. One of my favourite scenes of the films is the candy room where everything is edible and the song "Pure Imagination" is sung. It is by far the most iconic location from the film and I think would make a brilliant lego set. The bright colours and chocolate river translate perfectly into lego form and is something I would love to add to my collection. The film as a whole also reaches out to all ages. I remember watching it for the first time as a small kid and loving it, and then re-watching it recently and loving it still now! The movie is a timeless and a masterpiece, which is why I think it is definitely deserved of its own set.
Some of the hidden features and details in this set are of the following. The chocolate tube has some printed pieces which make up Augustus Gloop stuck in there like he is in the film, the boat with a wheel that spins as it moves, some doughnut flowers as well as some teacup flowers as they are Willy Wonka's favourites, a pie tree and a jelly man tree, some lolly pop plants and much much more. The build contains 2757 pieces. I hope everyone who sees this enjoys the build as much as I have enjoyed making it, and supports it to help it get to 10K supporters. I have done my best to replicate the factory as best I can, but please leave any suggestions in the comments to improve it if thought necessary.
I have also decided to add 8 minifigures to this project which include:
We need 10,000 supporters for this set to be considered for production, so please share and support!