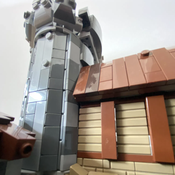 Long time ago this castle was inhabitat by King Brick, who was protected by his brave knights. At the gate there were two small watchtowers where a knight stood and made sure that no enemies entered the castle. When you have passed the gate you stand in the courtyard. In front of you is a small well from which you can draw water with a bucket. To your right is an outbuilding with a kitchen and a secret treasury with mysterious contents. On the left is a forge. Back then, the blacksmith made fine weapons such as swords and shields. It continues at a large hall where the king and his knights eat a feast after a battle has been won. They are entertained by a court jester and made to laugh with jokes.
In the great tower of the castle there is a small bedroom at the bottom, a writing room above and a lookout at the top.
A staircase leads to the mighty castle walls, where there are also a few weapons to defend the castle. And last but not least, there is a small toilet in a bay window.
If you like my idea as an official LEGO set please click the support button to like my project. That would really help me. Thank you in advance. :)
The castle contains five minifigures:
-      The king (King Brick)
-      One knight
-      The blacksmith
-      A court jester
-      A farmer
There are also two chicken, a pig and a goat.
The rooms of the castle:
-      The forge with an anvil and some weapons
-      The kitchen with something to eat
-      The treasury with many golden stuff
-      The great hall with three places to sit, a banner, a candle, a key and some drinking cups
-      The tower with a bedroom, a writing room and a lookout
-      A toilet with toiletpaper in a window bay
Thank you so much for your support and feedback.
With kindly regards