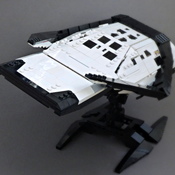 The iconic Ranger spacecraft from my favourite film of last year, Interstellar, lovingly recreated in Lego.

Perfect minifig scale and comes complete with crew members Cooper and Amelia (Mathew McConaughey and Anne Hathaway), not to mention one of the true stars of the film, Lego TARS.

The Ranger features a hinged canopy with a small handle allowing easy access to the cockpit and an opening rear airlock hatch, so you can recreate key moments from the film. The cockpit has two seats for the pilots and a central slot for TARS to recline in, just like in the film.

TARS is fully posable and has four joints connected by a central axle so he can walk.

I loved the design of the craft in Interstellar and really wanted to see if it was possible to recreate the shape of the Ranger in Lego. The whole project started off with the idea of using the black ramp inverted at the front. The 'horn wings' were a challenge, with many failed attempts before I finally hit on this solution. The final build is very detailed, strong and extremely swoosh-able!

I hope you like this idea and it's execution and consider supporting this project.