Tiger in the Grass 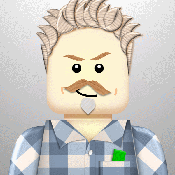 With its "fearful symmetry," the tiger ranks as one of my favourite animals, all the more so with its endangered classification. Thus, I built this tiger as my first foray into animal models. As with my cars and airplanes, my aim was to make it accurate as possible both mechanically (in this case, biomimetically) and proportionately while still maintaining the "swooshable" factor. After all it is a toy (and here it's difficult to not anthropomorphize) that wants to be played with.

It contains over 870 pieces. The analogue version must weigh close to two pounds. From the tip of the nose to the back of its haunches it is 26.5 cm long, and the tail is another 16.5 cm. At the shoulder the tiger stands 15 cm. Highlights include articulated legs (with all joints true to the quadrupedal mammalian skeleton), head, jaw, ears, waist, and tail. The shoulder pins are extended so that the arms may be pulled away from the body a bit, allowing the tiger to swipe. I built the arms in such a way that the shoulder blades slide back and forth while the animal walks, just like the real thing. For details, on the front end the eyes are complete with black pupils, and on the rear end - well, take a close look for yourself. The paws each have four claws, 1x1 circular plate toe pads, and 2x2 inverted sliders for palms; the front legs include dewclaws.

Perhaps the most challenging element was the torso. It was difficult to hold in my mind while I constructed it from the inside out, and every time I changed the tiger's proportions, I had to go through this process again. Once I began the computer program to render the model, I found using both analogue pieces and digital construction in tandem very useful.

Some interesting construction features include shoulder and hip pins that pass right through the body so they won't pull out when the limbs are manipulated. To conceal the foot joints I used 1x1 brackets. The head contains several car peices such as fenders and an engine manifold. Inside the torso, coloured pieces were used in places to symbolize organs--purple for lungs, red for heart, dark tan for digestive tract, light tan for vertebrae. For the inside layers of the side panels I used dark red to represent muscle.

I don't log the amount of time I work on LEGO projects (because if I knew for sure how long I might start to worry!) but I would estimate this project at well over 50 hours. I didn't include a photo of the analogue version because it is made from mix-matched pieces; scouring the web for the correct colours is an obsessive project in itself that I don't want to undertake just yet... The grass tubes might not come in the colours shown - I was going for a dried grass effect - but if they were available, I might consider using green from LEGO's new plant-based plastic as a nod to wildlife conservation.

This may seem strange, but my dog, a border collie-greyhound mix, very much wants her own pet cat. When she sees a cat or even hears the word "cat," she perks up in excitement. The first time she saw me carying the tiger, she had that exact hopeful expression - she thought I was holding a real feline! That was all the validation I needed to know I'd constructed a life-like tiger.