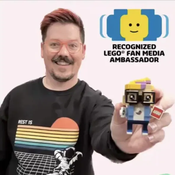 "On the twenty-third day of the month of September
In an early year of a decade not too long before our own
The human race suddenly encountered a deadly
Threat to its very existence
And this terrifying enemy surfaced
As such enemies often do
In the seemingly most innocent and unlikely of places..."
Welcome to Mushnik's Flower Shop! We'd love to have you drop on by to see Audrey II! This LEGO MOC is to honor the classic 1986 film (a remake of the 1960 film!) and the 2003 Original Broadway Cast production of the musical (based on the 1982 musical!).
The plant monster from Series 14 of the Collectible Minifigure Series blind bags has long been a favorite minifig of mine, and I've had him built into a small LEGO scene on a 6x12 baseplate, and called it my 'little shop' MOC for years, but always felt like it wasn't enough. While I love the minifig, I wanted to build an Audrey II that wasn't on a minifig body, and decided to try to build it while watching Little Shop at the start of October, in prep for Halloween - when it became clear to me that my first ever Modular MOC would HAVE to be from Little Shop!
I shared these photos on instagram earlier this week, and got a number of comments asking when it would be posted to LEGO Ideas for voting! Others' excitement and encouraging words led me to post it today.
The first floor is Mushnik's Flower Shop. I used images from the film and from a number of productions of the musical to gain inspiration, which led to a few things like the angled doorway, the sand green and white tiled floor, the retro cash register and red telephone, and the wainscoting. The backroom is full of floral details you'd likely find in a florist's shop. Some of the most fun of this build was designing all of the different flowers around the shop and deciding what should go where.
The second floor has a landing (mostly for Ronette, Crystal, and Chiffon) off of Seymour's apartment building. I'd built some interiors before, but hadn't ever built a bathroom, so that was fun to figure out!
Minifigs/characters include: Seymour Krelborn, Audrey, Mr. Mushnik, Orin Scrivello, DDS, Ronette, Crystal, Chiffon, and of course, Audrey II!
Thank you for your support and feedback!