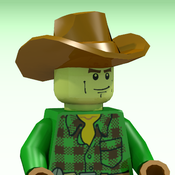 Pitfall is a very popular game for Atari 2060, created by David Crane and released by Activision in 1982. In the game, you control a treasure hunter called Pitfall Harry that runs through a jungle looking for 32 treasures in a 20-minute time period.

During the journey, Pitfall Harry may run, jump or swing on vines in order to avoid snakes, crocodiles, quicksand, scorpions, rolling logs and others hazards.

This set illustrates an adventure of Pitfall in a search for a treasure chest (although it is not in the original game) filled with gold bars and gold coins!

The two floors of the game were represented in this set. On the surface, is the jungle, with crocodiles in a lake (on the front side), a snake and rolling logs (on the back side). Under the jungle, there is a tunnel containing scorpions (like in the game).

If you are fan of Pitfall! and Atari games, please add your support.

If you haven’t had the incredible opportunity to know this game, please watch this video

And don’t forget to add your support!