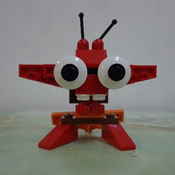 This project is based on my story about the Titanium Command Squad, a group of humans sent by the Alliance of Space Colonies to find Amythstone, a purple energy crystal that is used to power colonies on planets and moons.However, there are space pirates who try to steal the Amythstone for their own gain.

The pirate Ripper-Class starfighter features a hinged cockpit,cargo storage, huge saw blades, a huge exhaust and flick-fire missiles.The saw-bladed "wings" can move in a variety of ways, as seen in the pictures.

The two minifigures included are a TCS Pilot and a Pirate Pilot.The project also includes two cargo boxes, two Amythstone crystals and a rack with two laser guns and handcuffs.The rack can be split in half and attached to the ships via a stud on the back.