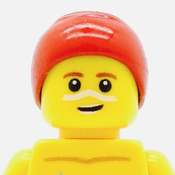 Fast forward a few decades and I’m now playing LEGO® with my 6-year old son Aiden. And we still can’t find a beach set to add to our LEGO® town!

Then last year I was diagnosed with stage 4 melanoma, a form of skin cancer caused by overexposure to the sun.

So Aiden and I thought we would finally build a beach set and make sure it included heroes that are "sun smart" (wearing hats, sunglasses and sunscreen). The set we came up with is:

The Surf Rescue set is inspired by the volunteer surf lifesaving movement that started in Australia over 100 years ago and which has spread around the world.

The set is designed to capture the fun of the beach as well as its risks, including the risk of overexposure to the sun. Hence the four Surf Rescuers we’ve designed all wear sunscreen, which we think would be a first for LEGO®.

So what’s in the set?

Our set is made up of the following elements:

This is the home base for Team Surf Rescue. It’s raised up on stilts to give our Rescuers a good view of the beach they’re protecting.  The Patrol Tower is solar-powered (naturally) and includes:

Yes, these are actually a thing now. The Surf Rescue Drone allows our Rescuers to keep an eye out for sharks via its nifty on-board camera. It also allows them to drop a lifebuoy to anyone in trouble.

These are the two most important pieces of lifesaving equipment on the beach. The flags mark out the safest place on the beach to swim.

When someone’s in trouble at the other end of the beach, the Surf Rescue Quad Bike gets our Rescuers there quick.

It’s fast, highly-manoeuvrable in the surf, and very, very cool.

Our sun smart Surf Rescue team is made up of four heroes (created by the amazing folks at minifigs.me):

Bob is the leader of the Surf Rescue team. He’s been a Surf Rescuer for 35 years and considers this beach his second home. Bob’s the guy you want around in an emergency and has won too many bravery awards to count. Bob is named in honour of Jamaican musician Bob Marley who died of a metastatic melanoma in 1981 at the age of 36. Bob comes with binoculars and one of his many bravery awards.

Keats is a doctor that volunteers at the beach every weekend. She’s the fastest swimmer on the team and can identify a rip current from 50 yards. Keats is named in honour of actress Diane Keaton who is a two-time skin cancer survivor and a passionate advocate for proper sun care. Keats comes with a first aid bag and handheld radio.

When Hugh isn’t running biathlons or triathlons, he’s down at the beach training for his next -athlon. He holds the beach record for most rescues in a day and the most ice creams eaten during a shift. Hugh is named after Australian actor Hugh Jackman, who has been very open about his fights with skin cancer since discovering a basal cell carcinoma on his nose in 2013. He’s also done a spot of amateur life saving himself! Hugh comes with a floating rescue buoy and a set of swim fins.

Nic is a student who, when not patrolling, is studying marine biology. Nic runs the Junior Surf Rescuers program and her favourite film is “Point Brick”. Nic is named for actress Nicole Kidman, who had a skin cancer removed from her leg and is a passionate advocate for cancer research. Nic comes with a loud hailer and floating rescue buoy.

A set of beach visitors

A beach set wouldn’t be complete without a few visitors, human or otherwise. Our set includes:

If the set were to be produced it would be awesome if LEGO® added sunscreen to our beach visitors faces as well, in keeping with the spirit of the set.

And last, but not least, the sand & surf

Extra blocks could be included for the option to add more waves.

Please help us make our LEGO® dreams come true by supporting our project. Simply create a LEGO® ID and click the “support” button above – it’s free!