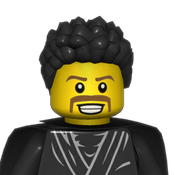 This is a Via Rail Canada train. It is a model of a real train and it runs across Canada through mountains.
The features are:
A motorized locomotive,
Detailed cars (Park car and Panorama car) and locomotive (F40PH-2),
A bridge,
Removable roof of the cars,
And a detailed interior of the cars.
I built this because I was inspired by another build on this website. The build was based on the same train that I have built and it was called VIA Rail Canada-the Canadian.I've always wanted to build a Canadian LEGO train so I decided to build it after I saw the other build that inspired me.
But the build wasn't without problems, once I  built the end car (the Park car)  I started running out of light grey pieces. So I was looking for a  car which didn't require light grey pieces. I eventually came across the VIA Rail Canada panorama car. That was white with green graphics. After I made that, I was looking for a locomotive, and I found a F40PH-2 locomotive. This is a un-refurbished model.
I think it will make a great  LEGO set because there is no other Canadian LEGO train and barely any LEGO trains are based on  real locomotives. I think this is a shame, because there are lots of fans of trains but can't get them in sets.
Please support, thank you for reading.
Thank you to my sister for helping me with the fantastic background.