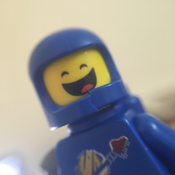 By tszkiuLEGOBOY
10 comments
This idea build is based on the 2017 musical movie <La La Land>. The build is based on one of the iconic scene of the movie, where the two main characters - Mia & Sebastian had their first dance where took place at a beautiful sight. The build includes the night view of the city and the landscape of the mountain that shows as a background. The colorful transparent tiles represents the lights from the city. The build is not only for display but also includes functional features by adding some TECHNIC elements. By using axle parts that link from the back to the front, winding the round bricks to create a “spinning stage” for minifigs at the front, which makes the dance more vivid.
One of the main reason of making this build is because in my opinion, I believe that one of the message from <La La Land> shares a similar values with LEGO, which is telling us “keep your passion in what you love and you’ll reach your dreams”. Like the lyrics said from one of the songs in the movie, this idea build is “to the ones who dream”.