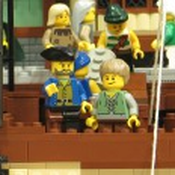 The SPL 68-7 "O" Mobile Recon Vehicle is a medium range reconaissance and scouting platform for planetary systems.  It's primary objective is to carry the flight vehicle close to enemy positions without being detected and then launching the flight vehicle for its mission.  The flight vehicle is capable of entering lower orbit on shorter missions, but lacks sufficient fuel reserves for sustained orbit and re-entry.

The SPL 68-7 "O" variant was a late block-upgrade to the earlier "M" version (the "N" version never went into production).  Improvements included upgraded treads on the ground vehicle that were more durable and were less likely to malfunction, leaving the vehicle disabled.  Improvements to the engine control on the ground vehicle allowed for further range, which also facilitated an improved radar and longer range communications package.  The flight vehicle was modified to include conformal fuel tanks, for improved range and allows for minor combat skirmishes.

The idea for this was inspired by the classic-space sets I had as a kid.  I enjoyed the idea of a ground based vehicle that could carry a smaller ship to the front lines to launch.  I re-worked the nose of the flight vehicle more times than I could count before I settled on something I thought looked reasonable.  I added the Earth's moon to one of the pictures as a throwback to the classic-space art of the 80's.  I hope you enjoy it, I had a lot of fun building it and now that the pictures are done, my kids get to enjoy playing with it too.