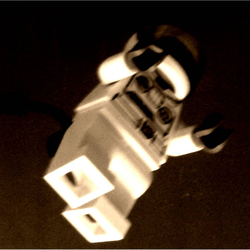 A group of bandits is destroying public goods. Stop them with the special police water canon truck.

The truck has typical police colors and sirens. It also has protection grids and bumpers. The drivers cabin contains space for two officers, a steering wheel, command for the water canon and space for equipment. There is also a big water tank behind with a ladder to acces the refueling hatch. The tater canon can be moved up and down and turned for 360 degrees. (The sticker on the roof is from an other set.)

The bus contains a bench, a dust bin and a bike grid. There is a copper plate (on the picture is gold because I don't have any copper plates) which could be stolen by the bandits.