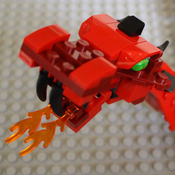 This whimsical monster is not as scary as he sounds.  Sure, he may devour minifigures, but despite his generous teeth, he seems to swallow minifigures whole!  Escape is just a matter of finding the key to his stomach!

I was inspired to build this silly beast after putting together the Lego Ideas Yellow Submarine set.  It seemed to me that the Fab Four needed an adversary during their sub-aquatic adventures.  However, any monster they faced would have to embody the nonsense and silliness of the original animated film.  Not having the skill or pieces to construct a Blue Meanie, I opted to build a creature of my own devise.

The Minifigure-Eating Monster captures the absurdity for which I was aiming.  His face hardly inspires fear.  He's more of a goofball.  The glass door to his stomach is surreal while simultaneously removing any permanent sense of menace the monster can produce.  In addition, his pastel wings, his lion legs, and his fish tail render him an absurd but charming chimera.

In addition to his silly appearance, the Minifigure-Eating Monster offers tremendous play value.  His mouth and ears are hinged so he can "chomp" on his victims and adopt multiple facial expressions.  His head rotates on his neck.  While he does not literally swallow minifigures, they can easily be placed inside his stomach through the opening door so they appear to have been eaten.  The wings are hinged to simulate flight.  The legs are articulated at several points for walking and posing.  And the fish tail is jointed at the fluke.  (Technically, it's more of a whale/cetacian tail since it moves up and down rather than side to side.)

Because the Minifigure-Eating Monster sports wings, legs, and a fish tail, it can be incorporated into play with many other Lego sets.  Perhaps our monster is a medieval menace, or an underwater wonder, or an extra-terrrestrial enemy.  Or maybe he's just a poorly understood monster trying to make his way in the Lego Universe.  The possibilities are endless.